― How was your first solo gravure filming? At the birthday festival last year I was talking about wanting to actively work on gravure in the future.
Seichan: Basically anything you want to have fun, I feel like I want to do a lot of things. But, from the fans, "It is better to wear clothes than like these?" (Laugh)

― What do you mean by that?
Seichan: What is it, Really? (Laughs)

― As another celebration, congratulations for entering the under-girls in the general election of the other day!
Seichan: Thank you very much.

― A little time has passed, please let me hear your frank feeling again.
Seichan: I was so relieved! If I could not be ranked in this year I was thinking that it was a really bad journey. Because there are so many juniors also growing up. It's the right time for me, I took the chance. If I do not leave results here, I may not be able to do it. I thought that I was targeting within 32nd of undergirls. It was really nice to be in the 32nd place.

― Even so, it is a great breakthrough. The number of acquired votes has jumped up to 32 place at a stretch from the last 97th place, which is about 32 times the number of votes cast last year. Fukuoka Seina is the one of most increased and have improvement amongst AKB Group members.
Seichan: I'm Surprised. When I said at last year's birthday, "I want to enter undergirls!", I actually thought "I definitely can not!" (Laugh).

― What do you think is the driving force of this dramatic leap?
Seichan: After the last general election is over, perhaps it was great that I could say my honest feelings properly through the SHOWROOM Live. In this general election, it seems that people who saw my Showroom live since the last general election did a good vote. Even at the nationwide handshake meeting, someone who did not know me at all until then tells me that "I liked seeing your showroom."

― Personally, there is an impression that it was good for Fukuoka-san herself and fans for surely presenting the goal of entering the under-girls. In the first interview, Seichan in a dialogue with Mr. Hayaka Inuyama, who planned at BUBKA one year ago, you said "I think that entering under girls is actually a difficult goal in reality. Still, I dared to set a big goal, I thought that it would be better to move along with the fans. "
Seichan: Yes, obviously I really do.

― It's wonderful to see your statement during the Sousenkyo stage.
Seichan: The importance of doing words properly was exactly taught from Komiyama Haruka.

― What kind of activities did you consider after you reached the goal of entering Under Girl in the last SSK?
Seichan: Since I was aware that I became a member of AKB48 Group, I was planning to enjoy more things. By doing acting with the feeling of having fun anyway, I feel that I have acquired the spirit of greed during the past year. I'm a type that not good at engaging with strange people, so I've had a really good friendship with member, until now it's with Komiyama Haruka. But in the past year I have been actively involved with members of other groups, so there is a response that has allowed more people to know about me. If there is an anxious mind anymore, it seems like I'm going to talk with you guys.

― From a young member who is desperately trying hard but not rewarded for it, I think that Seichan's big breakthrough will be a great hope for your career.
Seichan: I am serious thinking that I should do it. I really want to tell you that I do not want to give up. I do not want to abandon my feeling that I will shine best even at the edge. 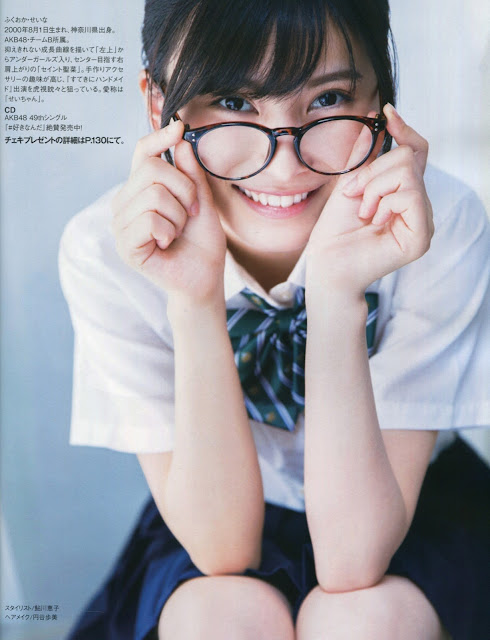