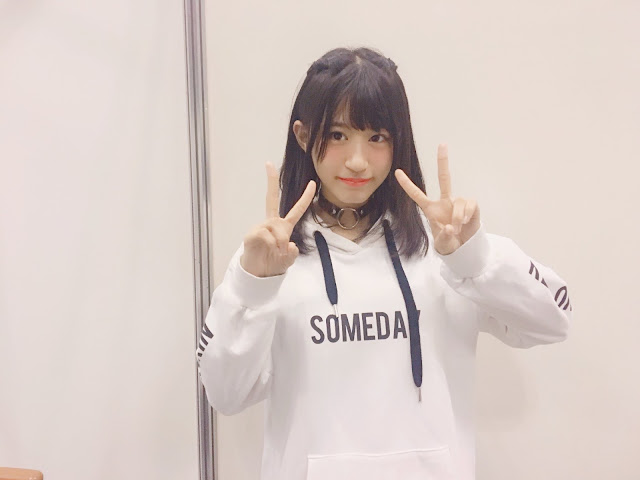 1. It took the shooting for more than an hour and it ended! Because it was your first solo swimsuit shoot in BUBKA, made it a schedule with a margin. So what's your thoughts?

Reechan: I'm excited. Since many posters of seniors are pasted in the theater, I have done research on pose.

2. You didn't have too much time to prepare?

Reechan: The reaction of the fans is various. Some people like "I just recently had swimwear." Some people are still thinking and saying I'm still look like a children.

3. Did you have advice on gravure from your older sister?

Reechan: Not only swimwear but overall advice, she is said that "Look at the mirror more". "Because your expression is bad, you should practice by watching the mirror." So, try making a smile on the bath. A smile is necessary even for performances.

4. Is not it? There was recently something that makes such a smile happen. Congratulations on entering "Masaka Singapore"! (NMB Album)

Reechan: Thank you! I was sent by e-mail and I knew it, but since it's wrote "Jonishi" I thought about my older sister.

Despite the interview ended, the convo between them hasn't even ended yet.

Sorry to keep you waiting. I may have kept you waiting too long.
At the moment when Jonishi Rei became a high school student during her career at NMB48, Sprint Hikaru has arrived many times from the direction of Kansai in the direction of "When you can worship the old Bikini!"

Even in this journal, I have been doing the super popular series "Kamisai fitness club" for over 2 years, and I was concerned about my sister's existence. Even when I talked to her right after the graduation concert, I was told that "My sister would like to ask in the future too!", And if you do BUBKA is not the beginning if you do! I was strongly thinking.

And in the summer of 2017 waited for a lot. Rei Jonishi came with a spirited expression before faced us, photographer staff.

I strongly declared that I am nervous about being the first solo swimsuit and "I'm totally fun! It's personality for entertainers!

The photographer of the day was taking a photo collection of her older sister, so even during the shooting it was exciting because of the topic "It looks like my older sister."

"I am more than me!" Please check it again in the gravure of this BUBKA magazine!