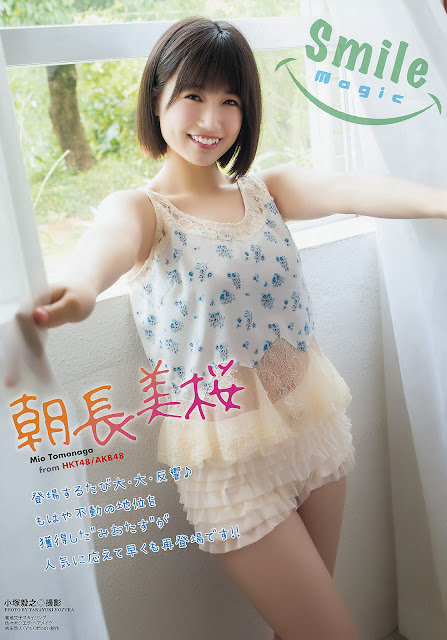 Thanks for coming, Mio-san, glad to be here with you. The first question coming up..

1. Tomonaga Mio, you says really want to be a new pioneer of HKT48, right?

Mio: Exactly. It seems that fans were surprised when I was said that. But it was really my goal.

2. What's your thoughts when you came with Sashihara Rino and interviewed alongside with her?

Mio: I was deciding that 'I am not nervous', it was my first time to talk with Sasshi one-on-one. But was good talking, I asked more and got answered. It's really out putting myself out. I said to the fans for a long time 'I don't like to lose my ambition', but I have been told that 'it is hard to see'.

3. You said you didn't want to lose, is the thought strong against the current pioneer too?

Mio: Obviously, I have feeling that I'm not only want but I can too.

4. Are you actually believe to 'beat' the likes of Sasshi, Meru and Sakura to lead HKT48?

Mio: Last time when I became a center of song there was a research subject and there was something like a topic center but it was parts that weren't enough. If I can do it, why not? I think that I would like to be a center. With my proper ability to say that my fans also waiting. I really wanted to show a growing figure.

5. What's your thoughts on Hakataza concert?

Mio: It was fun, everyone at the group work very hard for giving their best to the fans, nostalgic and atmosphere from the fans were amazing. Very thankful that I can be on Hakataza stage.

6. Your wish for the future of your career?

Mio: Wish I could release my 2nd Photobook and I want to have a long hair, means so easy to wishing but sometimes hard to do or get it.