The 16-year-old girl HKT48 Team's member, Tanaka Miku is finally came to UTB, making gravure and had a good time during interview.

- Do you go often recently?
Mikurin: Yeah I did. I did a karaoke, wanted for good food but don't fit at all. When I find some shops, I though that here is the nice place but it's absolutely nothing.

- If you are hungry, why you decide for doing a karaoke early?
Mikurin: I tried. But my friend forced me for karaoke (laughs).

- It seems that karaoke make you feel comfortable isn't it?
Mikurin: Of course, I feel like free when singing (laugh). Because when you are singing, you go to the toilet, drink juice, do different things.

- Do you really have a relationship with other members? (Laugh)
Mikurin: Nope, but I really close to fellow HKT48 Tomonaga Mio, she is so kind.

- What do you feel during gravure photo session earlier?
Mikurin: I'm really nervous.

- You are about becoming a high-school student in the spring, right?
Mikurin: Yep, I've prepared myself before, and it was going to be an amazing journey.

- Have you ever going to someone's party?
Mikurin: Last month to my friend's birthday. But usually I'm not going anywhere with people unless it's invited.

- By becoming a high-school student means the right time for you to grow as an adul
Mikurin: I feel the way of thinking has already become adutl than before. In the past it was normal because you can't really decide and understand the meaning at all. 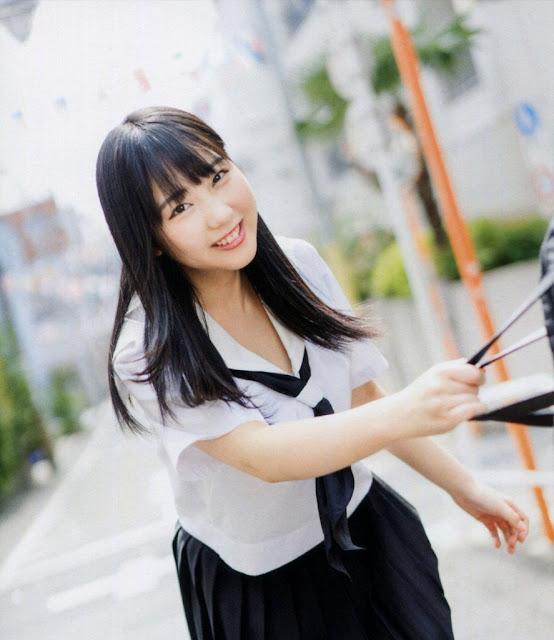